From the Beginning to the End, Presentness and Perceptiveness in SenatrA's Paintings 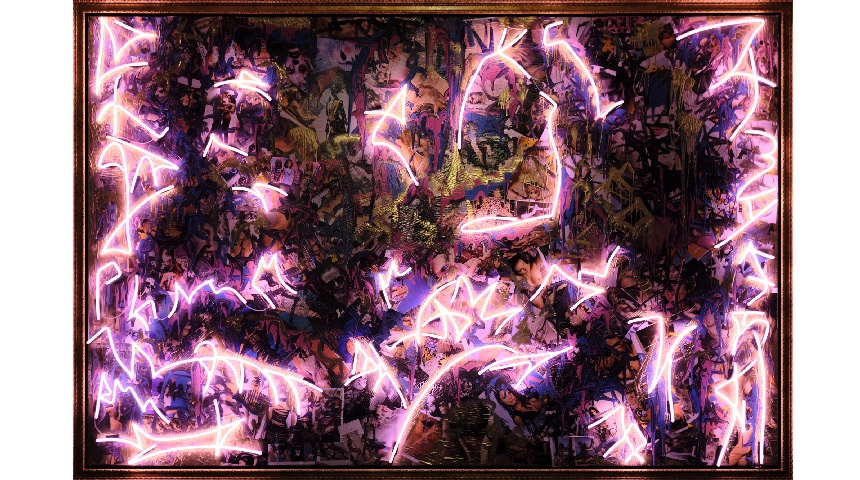 SenatrA's large-scale images chronicle a fleeting history of emotion, of relationships between colours, shapes, and lines. The Russian artist's paintings seize the moment, celebrating the Here and Now in a manner that is in equal measure understated and expressive. The art of sentiency needs not bear likeness to artwork, drawing instead from a sharp sense of perception and a richness of sensibility. In an interplay of both perspectives, SenatrA's work is intended to be viewed against the backdrop of the Western dichotomy of ratio and emotio that has, for centuries, shaped Europe’s cultural identity and self-awareness. ‘For me, feeling and painting break down barriers,’ explains the artist. She discloses that her art is often left untitled: She would rather not confine the associative wealth of the observer, conceptually or otherwise. Instead, she pursues the dissolution of aesthetic boundaries – as prescribed in the 1960s by Umberto Eco, in the eminent essay on open artwork, "Opera aperta" – engaging the audience in unmediated exchange. The artist also seeks to topple the hierarchies of traditional communication structures, still in place yet lacking universality despite innumerable thrusts towards democratisation in 20th-century art, and countless authorial requiems (consider, for example, ‘The Death of the Author’ [1967] by the French post-structuralist Roland Barthes, which would trade the death of the author for the birth of the reader).

SenatrA has, in recent years, cultivated a style evocative of medical imaging – especially cardiograms. Electrocardiography is a diagnostic method that measures the heart’s electrical activity: the so-called cardiac action potential is recorded by electrodes, as a series of upward and downward spikes, in a wave-like pattern. SenatrA’s artistic autograph resembles this up and down motion, inscribed in curved lines, sharp corners and jagged edges, arranged in irregular rhythms, highs and lows, gentle waves and precipitous jumps. The painter allows the paint to flow over the canvas like magma, cloaking the stasis of her medium in a metaphor of reality. Dynamic brushstrokes and well-conducted lines, from strong to fine, wander up and down the pictorial ground, occasionally blazing almost-meticulous trails through that which is already gathered and scattered. Webs of lines condense to pastose textures, producing a dense tapestry of sensation. Hard contrasts between black and white, subtle transitions and monochrome islands of colour represent the basis of a style of painting that reflects stirrings of emotion and moods: Here the ephemerally sensed – there the vehemently felt. SenatrA’s works also act as notations of time, capturing the fleeting nature of the moment, in defiance of the stasis of the non-living. The lightness of such painting is decidedly not due to a lack of emotional depth – on the contrary, it is owed to the nimbleness of SenatrA’s creative process and a proclivity for graphic depiction. Some of her recent works are enhanced with strips of neon light, accentuating relationships and discursive structures in line with French critic Nicolas Bourriaud’s relational aesthetics, formulated in the late 1990s. Bourriaud did not view contemporary artists as solitary beings safeguarding an independent, private space – rather, he saw in them catalysts within a social edifice and a decentralised network.

Before SenatrA settles down to work each day, she picks between two and at most four colours, drawing on their spectrum of associations from both symbolism and colour therapy, to circumscribe a priori the image’s aesthetic of reception. She then disperses quick-drying acrylic paint on the canvas with a brush, giving free rein to the rhythm of shape and colour. Her colours trail and track over the image surface, dripping down the canvas by directed happenstance, obeying gravity.

Colour signs are drawn in paint, into emblems of experienced emotion. Overlay and intermixture, sharpness and blur punctuate the aesthetic of these paintings, asserting the presence of a handed-down medium. Executed altogether abstractly, they decidedly reject the illusionism of new-age panel paintings. Here, reality is not objectified; instead, it is reproduced through depictions of affective universes.

SenatrA paints in a state akin to trance. Every image is borne seamlessly, created without interruption: Painting from Alpha to Omega. The artist does not dwell on myriad decisions during the creative process — as if she were portraying the instant quality of experienced time, unmediated, devoid of hesitation. Her more recent works include a final, subtractive, step – specifically, to the application of paint: She tears and scratches at the surface of the painting.

Other pieces are finished off with gold and silver spray paint, in a nod to the style of graffiti artists. Street art has always enthralled SenatrA, with the spontaneity of its inscriptions, it’s deliberate markers of destruction, and the signatures of illicit ‘writers’ left on metropolitan walls: the boundary of internal and external, at the intersection between the private and the public. The same can be said for clandestine intrusions that corrupt the superficial sheen, re-negotiating the laws of visibility as they navigate public and social allegiances.

SenatrA’s brush, like Andy Warhol’s camera, is a recording device – albeit an analogue one; one that enables her to craft her aesthetic translations: the subjective exploration and visualisation of an inner life as a transformative act projected onto a canvas screen. Thus, she distances herself, on one hand, from the representational depictions of 19th-century atmospheric painting that used landscape as the vehicle of expression; and on the other hand, from the heroic gestures and expressive outpourings of emotion favoured by European and North-American painting royalty. Neither breakthrough ideas of an individual apotheosis of the artist’s self, nor exaggerated prostrations in front of the canvas have ever interested SenatrA.

The history of art and culture has strived to give interpretation to all facets of reality; to deliver explanations for traumatic events that have plighted individuals and nations; it has contributed to a collective working through of the past. In her square- shaped artwork ‘War and Peace’, SenatrA gauges the peaks of emotional polarities; peaks that also manifest in society’s collective behaviours, in the fate of nations and in territorial grapples. The artist has deconstructed Leo Tolstoy’s epoch-defining oeuvre, modern Weltliteratur of the 19th century, into an irregular collage of single pages pasted across the canvas, and painted over. With this self-assured gesture of appropriation, SenatrA enters a tense relationship with the historical template and the borne words of a grand literary figure, and redefines contemporary art-making. One well-known quote from Tolstoy’s work, however, aligns with the artist’s aesthetic approach: ‘As soon as we assume that human life can be ruled and steered by reason, life as such is made impossible.’

Working with or from templates is a more recent aspect of SenatrA’s creative process; a reference to a cultural reality in word and image, that she blends with her typical, sketch-like introspections. In another paint-over piece, the artist takes hypersexualised mangas or images of women from magazines such as Vogue and Playboy, and applies them to the canvas alongside self-portraits. SenatrA elevates herself above superficial depiction with this self-assured, feminist gesture, that places pin-ups and stylised decals of women in dialogue with the abstract vernacular of form. Reclaiming the female body from a society that continues to objectify women, particularly in mass culture, becomes a folio for a manner of painting that questions the fixation on glamour and the cult of superficiality by means of exaggerated (gender) clichés.

The artist shows how all that glitters is not gold, and posits that appearances hold little sway over awareness and sentiency.

* This article was published in Artco Monthly & Investment, October Issue, 2021.