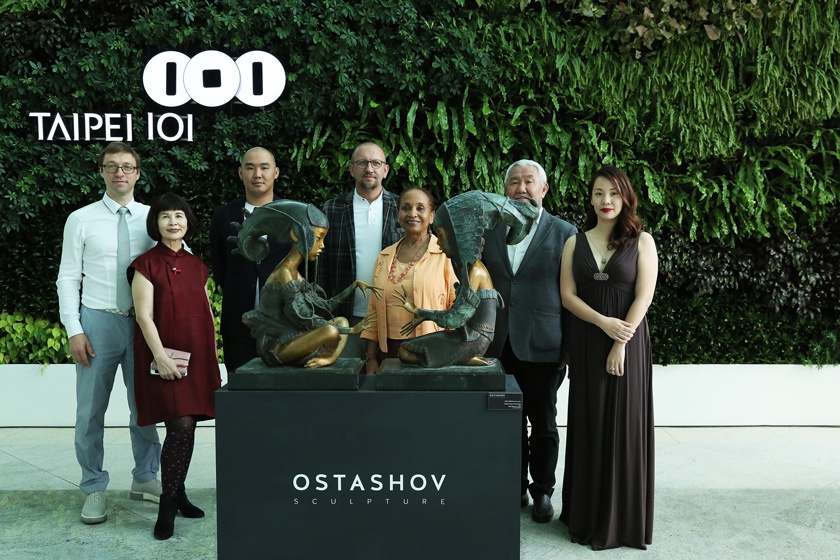 Be Fine Art Gallery (Taipei) and Gallery KHANKHALAEV (Moscow) are invited by Gallery 101 (Taipei) to co-organize Belarus’ artist Andrey Ostashov’s first solo show in Asia“Land of Eurasia – Andrey Ostashov” at Gallery 101 from May 7th to June 8th.  On the opening ceremony held on May 9th afternoon at two’ clock, the artist Ostashov was present to deliver a speech and a guided tour followed on site after the ceremony.

Andrey Ostashov, born in Minsk Belarus, in 1970, is one of the artists who entered Belarusian art scene at the turn of the century, adding a new accent into it. His works are in the permanent exposition of the National Art Museum of Belarus, Funds of the Contemporary Fine Arts Museum of Belarus, the Museum of Arts in Malaga (Spain), and are in private collections in Austria, Belarus, Great Britain, Germany, Holland, Spain, Canada, Lithuania, United Arab Emirates, Poland, Russia, USA, Switzerland and Taiwan.

With a uniquely artistic style based on myths of different times and peoples which serve as a material of creating his own expressive world, Ostashov’s version of Oriental poetics organically connected with the European tradition and innovative lineaments of this century’s culture. The sculptures are bewitching and intriguing; they are to be solved, deciphered, scrutinized, and perceived. The quaint and diverse world, that is invented and simultaneously convincingly authentic, reveals many actual problems of art and difficult philosophical questions of our time.

“Land of Eurasia – Andrey Ostashov” features the latest works, including The Heart of Princess 2017 Dialogues of the Elements 2017, Walking in the Forest 2015 and the most classic piece, Eurasia 2013、and also Made in Paradise 2013, Eclipse 2011, along with smaller pieces such as Seven Samurais 2013and Gift Series: Our Kids 2013. His skillfully toned bronze represents several basic themes - the characteristic female image that passes a way of growing and metamorphoses from a teenage girl to a true woman; a series of male types in the appearance of Samurais. Sometimes, with a timid smile, they narrate the essence of men's character in the author’s understanding. Works from the field of contemporary myth-making deserve separate attention. Characters of Ostashov’s sculptural phantasies are thoughtful girls in heroes’ heavy armor, fantastic animals, and astonishing warriors that reveal a new perusal of the idea of “two worlds in one”.

With a paradoxical melange of motifs, Ostashov’s modern language speaks about the mythologies of Ancient Greece and the Ancient Orient, today’s city culture, and inner self of each of us. An combination of traditions and innovations allows the artist to create his own world of images – a fantastically bizarre, simultaneously warm and close one, which invites us to unhastingly apperceive the artist's conception. In the exhibition, spectators will see Ostashov’s intensely creative life for more than 20 years.